Craig George and Barb Tudor have evaluated over 6000 photographs taken in the spring of 2011. These will be used to match with photos from past years to determine body growth, calving rates, scar types, and even population size.

The pictures below are examples of photos that can be used for photo-recapture identification. 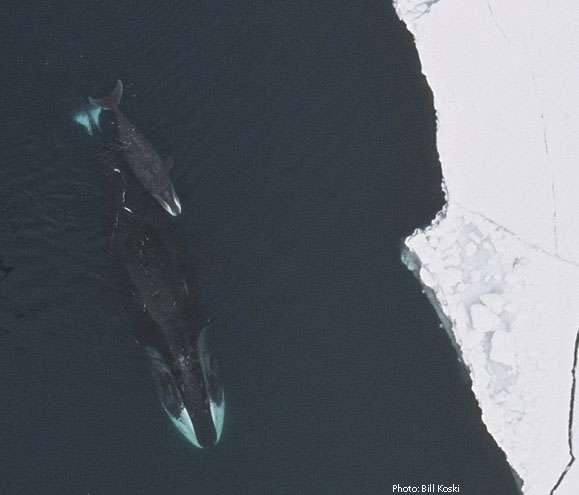 Bowhead whale cow-calf pair moving along the ice edge during the spring near Barrow in 2004. (Source: Bill Koski)

Bowhead whale photographed off Barrow in the fall of 2005. Note the scar and white flukes which are characteristics of very old whales. These marks are useful for photo re-capture identification. Photo: Craig George

Following is a great example of a photo-recapture.

Photograph on the left: Female bowhead whale with a neonate calf taken on May 24, 2011 at Barrow during the spring migration. Photograph on the right: The same pair photographed on September 13, 2011 at Barrow during the fall migration. Note the scars on the back of the female which are used for identification, and how much the calf has grown in nearly 4 months. (Photos courtesy of National Marine Mammal Laboratory, Seattle, WA [Permit #14245] and NSB Dept of Wildlife Management). 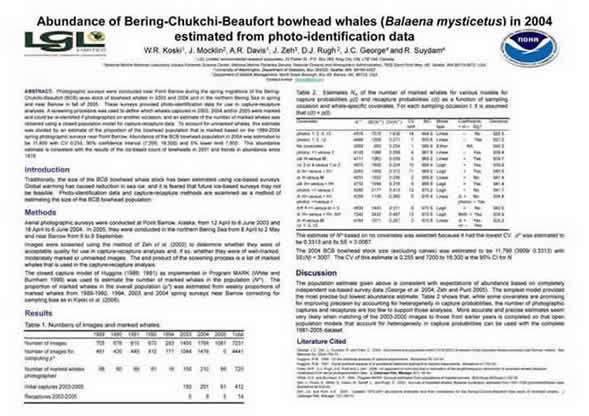