Analysis of scars from aerial photographs as well as photographs of harvested bowhead whales will be done to estimate the frequency of scarring events from line entanglement with fishing gear, ship strikes, killer whale bites or other injuries. We hope to come up with information which will be useful for management recommendations and for mitigation of future activity or development plans.

We have summarized the kinds of scars that occur on landed bowhead whales. While most scars are jagged scars, probably from injuries from ice, some whales show rope entanglement, ship strikes, and killer whale injuries. We identified and counted scars from over 500 harvested bowhead whales between 1990-2012. We also made a list of bowhead whales with commercial fishing gear on them that were either harvested, found dead, or observed alive. Our “first look” suggests that about 13% of harvested bowheads show entanglement injuries and/or scars. The occurrence of entanglement scars was larger for large whales with about 50% of large bowheads (over 53 feet) showing fishing-gear scars. Whales less than 30 ft rarely show entanglement scars. Scars associated with ship strikes are rare and occur on only 2-3% of all harvested whales. Scarring from killer whale injuries were fairly common really large bowheads (over 50 feet) but less common on bowheads less than 30 feet. These kinds of injuries do not seem to be slowing the rate of recovery of bowheads but are something the Department wants to “keep an eye on”.

Fisheries bycatch is now considered the greatest threat to cetaceans worldwide by the IWC. Entanglement scarring has been observed on Bering-Chukchi-Beaufort Sea (BCBS) bowhead whales even though their high-latitude distribution is mostly north of commercial fishing operations; however, some spatial overlap occurs in winter. We have examined aerial photographs of all inter-year matches (between 1985, 1986, 2003, 2004, 2005 and 2011) from a multi-year photo markrecapture study and identified whales that had acquired entanglement injuries during the study period. The black skin of the bowhead heals as a white scar leaving a permanent record of past injury. We estimated the probability of a bowhead acquiring an entanglement injury using two statistical methods. Both methods give similar results suggesting a 2.2% (1.1% and 3.3%) annual probability of acquiring an entanglement-scar, suggesting that about 40% of adult whales will be scarred after ~25 years. This estimate is consistent with the percentage of harvested whales 50 years and older that carry entanglement scars. Similarly, in our recently published work on harvested bowheads by Alaska Native hunters, we noted that 12.2% had evidence of entanglement scarring, likely associated with Bering Sea commercial fisheries. Similarly, our analysis of a fully independent dataset of aerial photographs (from 2011, n = 693) with adequate photo quality of the caudal peduncle indicates that 12.6% (n = 87) show evidence of entanglement scarring. These various estimates are quite consistent and provide a good indication of the current status of bowhead entanglement rates. While the BCBS bowhead population is increasing at a relatively strong rate, these independent datasets indicate that fish/crab gear entanglement is a more serious concern for BCBS bowheads than previously thought. The Alaska Eskimo Whaling Commission, UA Fairbanks, and North Slope Borough have engaged with the Alaska Bering Sea Crabbers to discuss specifics about gear types, range overlap, and the goal of stabilizing and/or reducing entanglement. (see poster presented at AMSS 2019 below)

If you see line entanglement injuries, propeller injuries or killer whale bites on your landed whale or see injuries like these on whales at sea, please try to take a photograph and let us know. 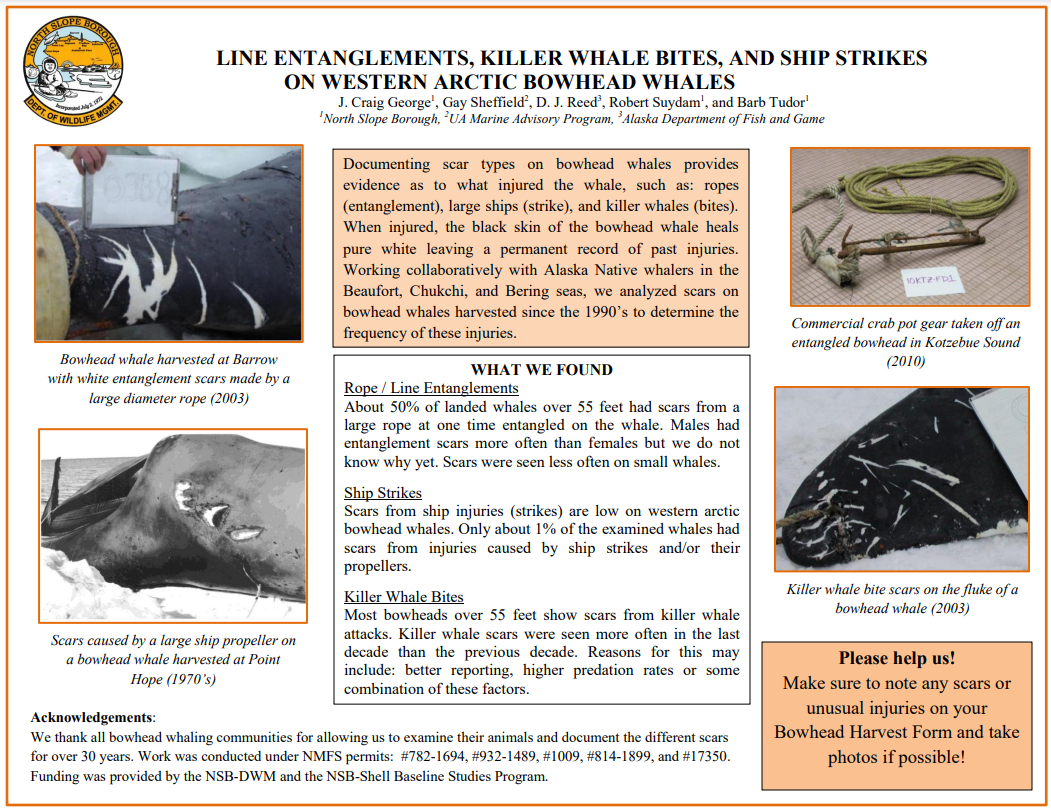