In recent years, walrus have been spending more time hauled out on beaches in northern Alaska. Attached below is a report on the 2009 walrus haulout event near Icy Cape. Haulouts occurred again during the summer of 2010, with a large haulout near Point Lay. The guidelines below were distributed Slope-wide to help minimize disturbance of walrus on haulouts by aircraft, marine vessels, tourists and hunters. 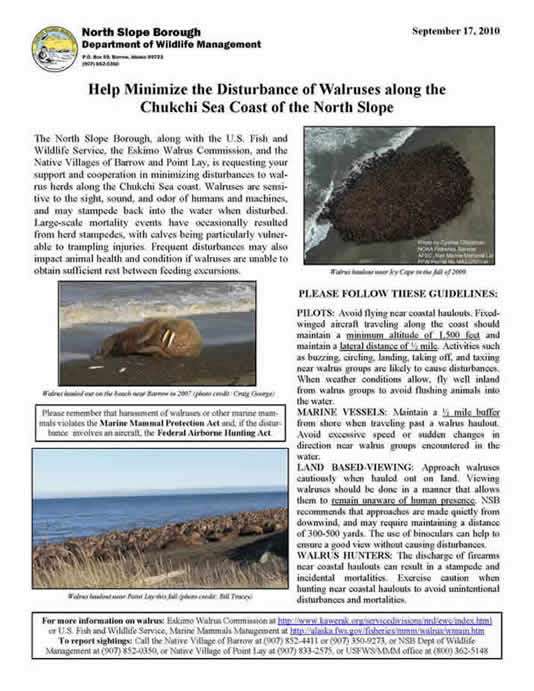 Congratulations to the Native Village of Point Lay for receiving the “Outstanding Partner” Award from the USFWS in March for the village’s efforts in protecting walrus during the haulout event that occurred near Point Lay last September of 2010. Their efforts prevented disturbances to the walrus which could have caused a stampede, resulting in injury to animals. The community provided a news release and walrus photographs to the media in an effort to allow the media to get their stories, yet keep the walrus from being disturbed. The community of Point Lay has worked closely with DWM wildlife biologists in the past, especially on beluga and bowhead whales. We would like to acknowledge the special efforts made by Leo Ferriera, Sophie Henry, Willard Neakok, Bill and Marie Tracey, and applaud the entire community for their demonstration of respect for wildlife during this event. 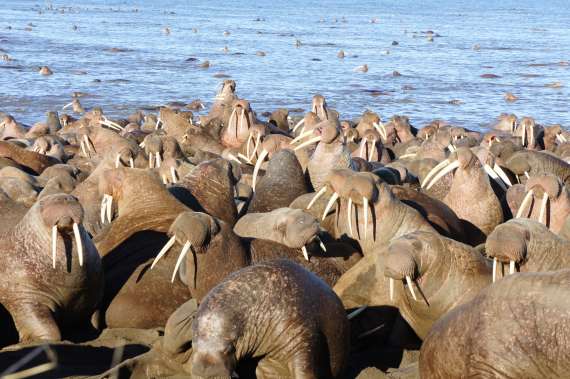 Walrus hauled out on beach near Point Lay, Alaska, in September 2010. Photo: Bill and Marie Tracey

Enumeration of Pacific Walrus Carcasses on Beaches of the Chukchi Sea in Alaska Following a Mortality Event, September 2009

Here’s a report on the walrus mortality event discovered at Icy Cape on the Chukchi Sea in September of 2009. Biologists from the NSB-DWM, Craig George and Robert Suydam, DWM Subsistence Research Specialist, Billy Adams, and a hunter from Wainwright, Harris Aguvuluk, accompanied USGS, USFWS, and Alaska Sea Life Center staff to investigate and examine the carcasses of the trampled walrus. Go to this website.

The Pacific walrus Odobenus rosmarus divergens feeds on benthic invertebrates on the continental shelf of the Chukchi and Bering Seas and rests on sea ice between foraging trips. With climate warming, ice-free periods in the Chukchi Sea have increased and are projected to increase further in frequency and duration. We radio-tracked walruses to estimate areas of walrus foraging and occupancy in the Chukchi Sea from June to November of 2008 to 2011, years when sea ice was sparse over the continental shelf. The earlier and more extensive sea ice retreat in June to September and delayed freeze-up of sea ice in October to November, created conditions for walruses to arrive earlier and stay later in the Chukchi Sea than in the past. The lack of sea ice over the continental shelf from September to October caused walruses to forage in nearshore areas instead of offshore areas as in the past. Walruses did not frequent the deep waters of the Arctic Basin when sea ice retreated off the shelf. Walruses foraged in most areas they occupied, and areas of concentrated foraging generally corresponded to regions of high benthic biomass, such as in the northeastern (Hanna Shoal) and southwestern Chukchi Sea. A notable exception was the occurrence of concentrated foraging in a nearshore area of northwestern Alaska that is apparently depauperate in walrus prey. With increasing sea ice loss, it is likely that walruses will increase their use of coastal haul-outs and nearshore foraging areas, with consequences to the population that are yet to be understood. 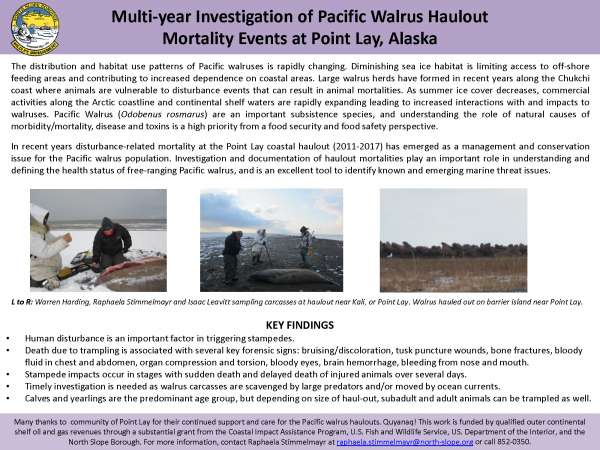 The summer ice pack brought with it many walrus offshore from Barrow. On July 17th hunters reported seeing many walrus on the ice pack floating northward past Barrow. Unfortunately, some walrus pups became separated from their mothers and orphaned as the ice moved along. On July 20th, one pup was discovered by fishermen Price Brower and Jacob Negovanna who alerted our department of the walrus near their nets in the North Salt Lagoon behind the old hanger. After contacting USFWS, the pup was captured on July 21st with the help of NSB-DWM staff and NSB Veterinary Clinic staff. He was held at the NSB Veterinary Clinic overnight under the watchful eye of NSB veterinarian Sarah Coburn. This pup was later given the name Pakak (pronounced puck’ uck). 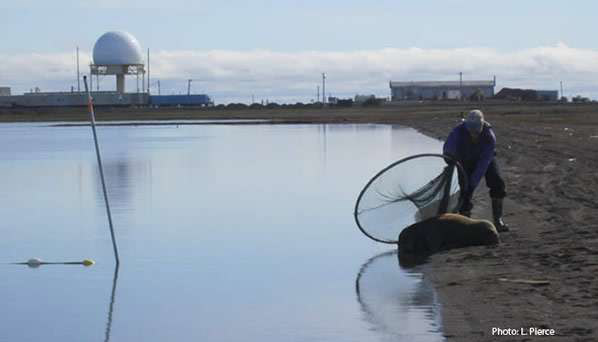 Robert Suydam capturing Pakak as he sleeps on the edge of the North Salt Lagoon. Photo: Leslie Pierce 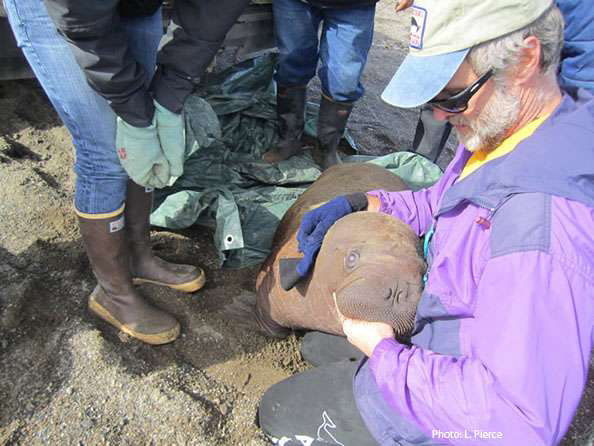 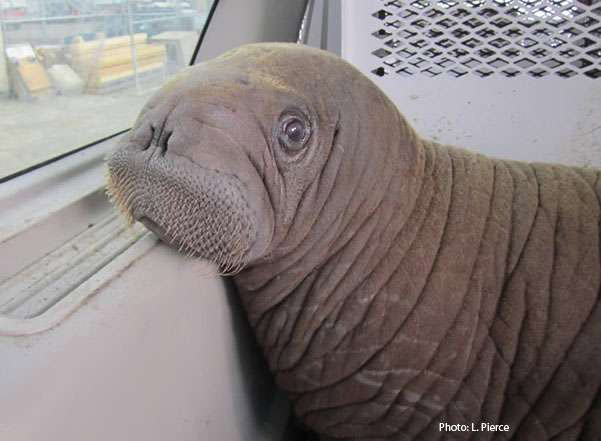 Pakak in the back of the Vet Clinic vehicle. Photo: Leslie Pierce

Upon arrival of Alaska Sealife Center staff in Barrow the next morning, after a quick exam and administering of fluids (walrus “gatorade”), travel to Anchorage was arranged for the afternoon. Thanks to Northern Air Cargo for providing the flight free of charge. The walrus pup was transported via truck from Anchorage to Seward. 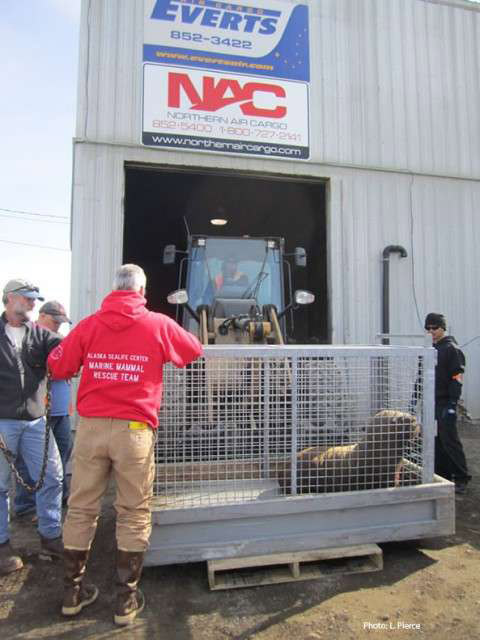 Pakak in cage ready to be loaded on the NAC flight to Anchorage. Photo: Leslie Pierce

On July 29th another walrus pup was found by Marcus Williams and other seal hunters out near the ice off of Barrow. This second pup kept swimming near the hunters’ boats. Joe Sage, who was also out seal hunting, waited for about an hour and when no mother walrus showed up he called our department. He was given permission by USFWS to transport the pup to shore in his boat and brought to the NSB Veterinary Clinic. During the boat ride, the walrus pup cuddled up with Joe’s daughter, Mitik (pronounced mit’ tick), and the pup was later given the same name. 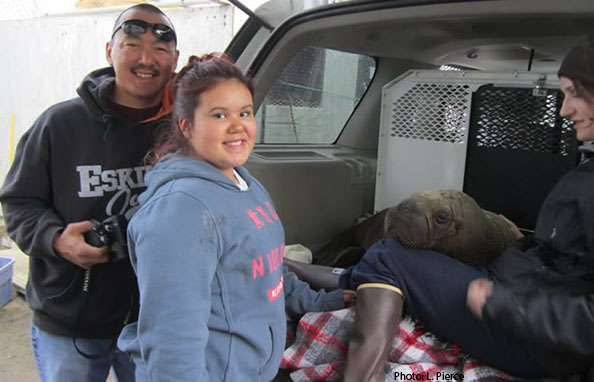 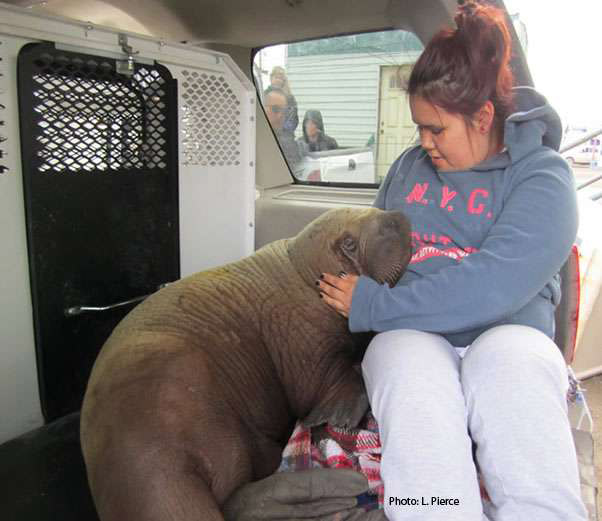 Mitik cuddled up to her namesake, Mitik. Photo: Leslie Pierce

Once again, the Alaska Sealife Center staff, Tim Lebling, made a trip to Barrow. Just before Tim’s plane landed in Barrow, a third walrus pup was found just south of town on the beach. With USFWS permission, NSB-DWM staff picked up the walrus and brought it to the NSB Veterinary Clinic. After spending the night trying to hydrate the walrus pups, Tim contacted the airlines to try and arrange flights. These two pups were not as healthy as the one found the week before and needed to get to the Sealife Center quickly. Commercial flights were unavailable until possibly the next day. So, the US Coast Guard, who have recently been stationed in Barrow during the open water months, was notified and they agreed to arrange for the two walrus pups to hop on a C-130 transport that was coming in that afternoon and heading back to Anchorage right away. Once again, the second and third walrus pups were trucked from Anchorage to Seward and immediately given medical care that was not available in Barrow. 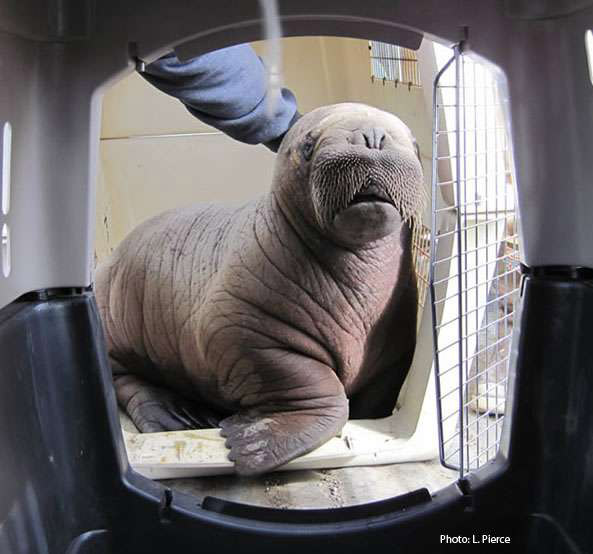 The third pup being loaded into a smaller travel crate in preparation for the flight to Anchorage. Photo: Leslie Pierce 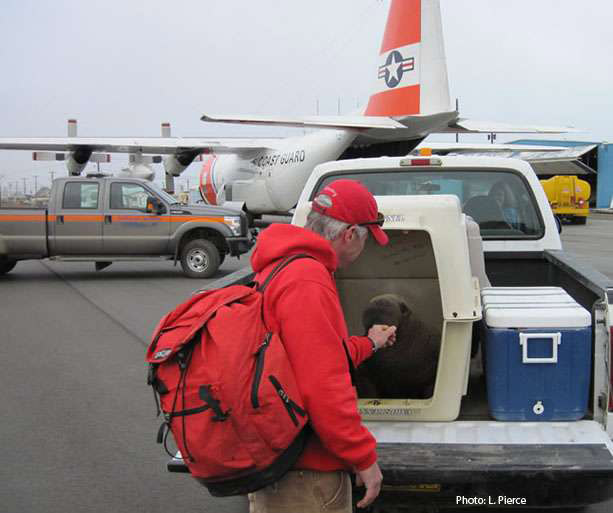 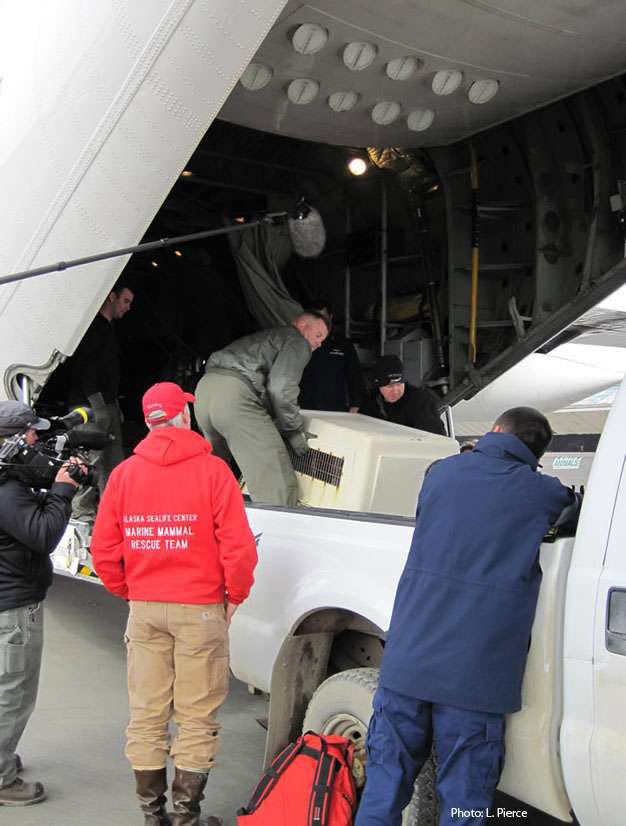 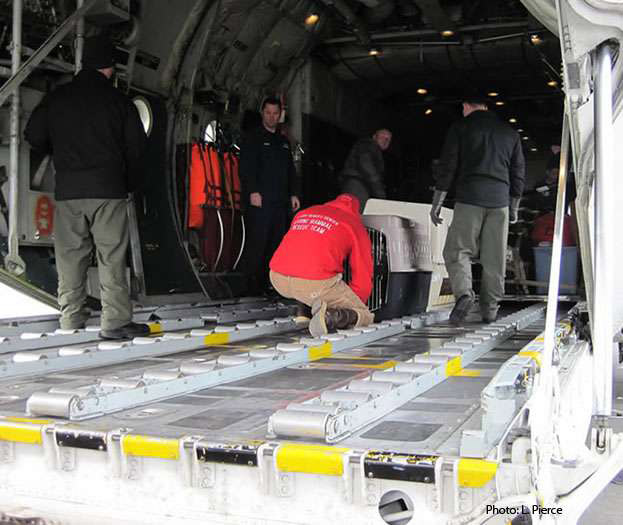 Thanks to all of the hunters who acted quickly to allow these walrus pups to be rescued in time. Thanks to the NSB Veterinary Clinic for providing housing and support staff for round the clock care while in Barrow. And, thanks to the Alaska Sealife Center, especially Tim Lebling, for their quick response and tremendous effort in keeping the walrus pups alive and also for informing us of their well-being.